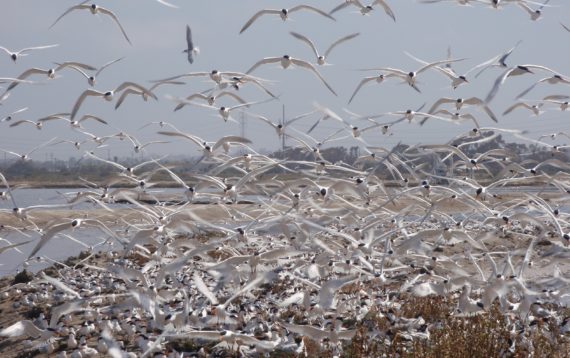 The South San Diego Bay Wetland Restoration Project restored approximately 257 acres of coastal wetlands in in the southwest corner of San Diego Bay. In September 2011 two former salt ponds were opened once again to the tides, after being converted from salt marsh approximately 50 years ago, and closed off from the Bay. Over 70 percent of San Diego Bay’s coastal salt marsh habitats were lost in over the past 150 years from dredging and filling to accommodate maritime and urban development. Prior to restoration, the salt ponds had very low diversity and abundance of fish and other marine species due to poor water quality in the ponds.

The restoration of coastal salt marsh was achieved by removing and redistributing sediment to restore appropriate tidal elevations and create channels in the ponds, and at the Chula Vista Wildlife Reserve, and then breaching the levees to restore tidal circulation. The restoration areas were then planted with native salt marsh vegetation, after removing debris such as mattresses, a sunken dock, a motorcycle frame and 58 tires. Projects such as the South San Diego Bay Salt Wetlands Restoration will reverse some of the damage that has been done, increasing the region’s resilience in the face of climate change and improving water quality in San Diego Bay.