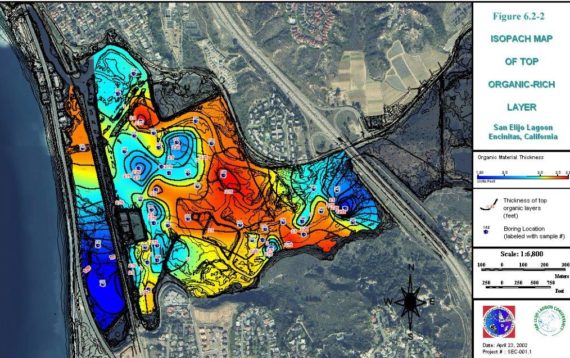 This project performed a preliminary assessment of sediment quality and depositional environment of the San Elijo Lagoon as the first step in a feasibility analysis of proposed dredging activities.

It has been decades since San Elijo Lagoon was naturally connected to the Pacific Ocean. Human modifications to hydrology occurred at a rapid pace after the 1880s. The first bridge and berm crossing the lagoon was constructed by the railroad in 1887, followed by Pacific Coast Highway in 1891 and, in 1965, Interstate 5, which divided the wetland in half.

This “partitioning” of the lagoon created altered flows for both fresh and saltwater, leading to accelerated sediment deposition, dramatically-reduced water quality, and a reduction in native estuarine habitats due to increased runoff from development upstream. During the winter storm cycles the inlet often became blocked by an accumulation of sand in the tidal channel. As temperatures rose in the spring, the demand for oxygen increased, and, without the circulation provided by the ebb and flow of the tides, the entire lagoon became stagnant, smelly and mosquito-ridden. The lagoon inlet, rarely, if ever, opens naturally. . Efforts to keep the lagoon open to tidal circulation have shown that significant ecological benefits result from increased tidal flushing.