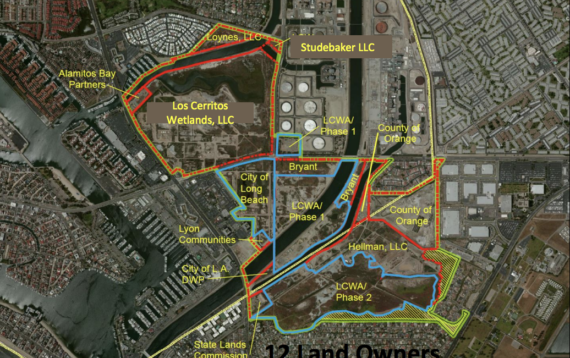 This project aims to acquire the 87-acre Bryant Property, which is part of the approximately 400-acre Los Cerritos Wetlands Complex. As late as the 1920’s, the Los Cerritos Wetlands covered approximately 1,500 acres.  However, channelization of the river for commercial and residential development, and extensive use for oil extraction and production over the last several decades, has reduced the footprint and health of the wetlands significantly. The majority of the remaining 400-acre wetland complex falls on three privately-owned properties referred to as the Bixby, Bryant and Hellman properties.

The Bryant Property is located in the City of Long Beach, south of Westminster Avenue and east of Studebaker Road. The property has been an active oil field for several decades and currently contains twelve active oil wells and associated pipelines, roads, and buildings. The historic wetlands on the property have been filled and degraded, primarily due to the oil production activities and have a high restoration need.