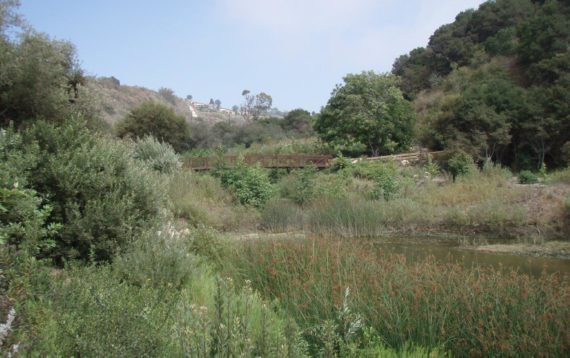 This project expanded the Arroyo Burro Estuary by restoring the lower portion of Mesa Creek, planting native vegetation, and improving public access. Located at the end of the Arroyo Burro County Beach Park parking area and within the Douglas Family Preserve, the project was designed to restore coastal estuarine, riparian and coastal sage scrub habitats, and improve water quality in Mesa Creek, the estuary, and at Arroyo Burro Beach.

The project involved daylighting a section of Mesa Creek which previously flowed underground through a culvert. The project also included fish passage enhancements to benefit the endangered Southern Steelhead Trout and the expansion of the estuary to benefit the endangered tidewater goby. New trails and a pedestrian bridge, along with interpretive signage to educate visitors on the purpose of the project, were installed to allow access to the Douglas Family Preserve.

Restoration funds were focused on the Arroyo Burro Estuary because it was highly degraded in terms of water quality and wildlife habitat. The estuary had been greatly reduced in size (in the early 1900’s the estuary was over 500 feet wide, and prior to construction was approximately 50 feet wide), and a large portion of Mesa Creek had been diverted into a cement culvert. In addition, a number of invasive plants had colonized disturbed areas within the estuary. Water pollution was also an issue at the estuary, with a number of samples every year exceeding the State contact standards for bacteria.