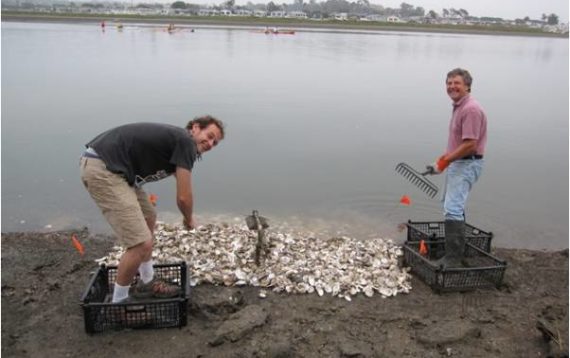 The Olympia oyster is the only native oyster species on the West Coast of the United States. It was once widely distributed in California bays and was an important food source for Native Americans. In the early 20th century, natural populations were depleted due to a combination of over-harvesting, dredging, pollution, and filling and draining of wetlands. Oysters are an extremely important component of a healthy and resilient estuarine ecosystem because of the myriad ecosystem benefits they provide.

A 60 square meter oyster bed was created in Alamitos Bay using volunteers from the community. The public participated in the project through “oyster gardening” where community members  hung strings of oyster shell off of private or public docks around Alamitos Bay where the oyster strings  collected native oyster recruits.

Scientific monitoring activities have been ongoing since the bed was constructed.  Densities of native oysters on the restored bed during the most recent sampling period were 65-103 times the average reference location density.